A few weeks back I gave a talk at Laracon Online entitled You don't know Git. During the talk I demoed several unfamiliar Git commands. While I did cover git bisect, I didn't provide a demo.

Demoing git bisect is challenging. The command has several subcommands and requires context about the code. As such, a contrived example doesn't do git bisect justice.

Now, I've admittedly only used git bisect five or six times in my Git career. But just the other day I used it to find a bug deep in my application. I want to share this scenario as a real world example of using git bisect.

First, a little context. As I'm sure you have noticed, I recently released a video series on Git called Getting Git. I use Stripe Checkout to handle payments. This keeps things pretty simple, just requiring me to drop a piece of JavaScript on the page. Stripe injects the necessary front-end code to create a pay button that pops up a checkout form.

The other day a someone went to checkout and when they clicked the pay button nothing happened. Fortunately they reported this, so I started investigating. I confirmed the bug in a few different browsers. I reached out to Stripe support. There were no known issues on their side. So I dropped their checkout code onto a fresh page and it worked fine.

The bug was clearly in my code. But where? Looking at the commit log, there wasn't anything related to the checkout code in a while. In fact, using git blame showed that the checkout code hadn't changed in over a month. I knew this bug hadn't existed for that long.

While I could've continued this detective work myself and eventually found the bug, I could instead use git bisect.

I took a few screenshots when I used git bisect to find my checkout bug. I'll review these to work through the process of using git bisect.

I then provide the bad commit by running git bisect bad. In my case, this was the top commit as the bug currently appeared in my code.

I then provide the good commit by running git bisect good. In my case, I got this commit from git blame as I knew the checkout originally worked. Finding the good commit may take a little detective work. However, this doesn't have to be precise. That's what git bisect is for. Often, I'll jump back several commits at a time until I find a good commit.

After a few iterations, git bisect outputs the first bad commit. Or the commit where the bug was introduced. 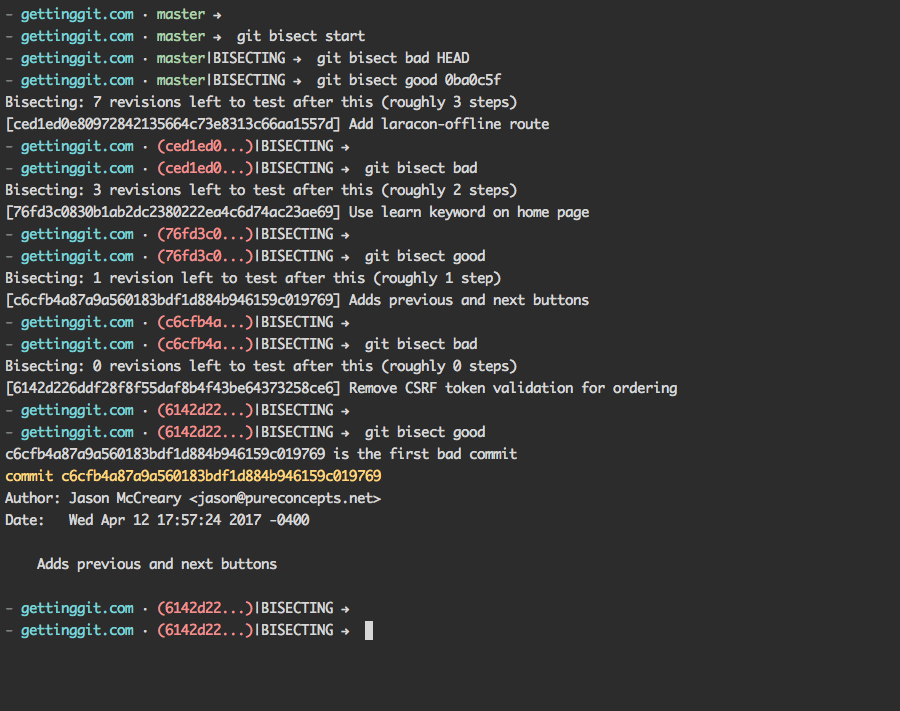 Honestly, the first few times I used git bisect I didn't believe this was the right commit. But I assure you there's some change in this commit that introduced the bug.

In my case, I added some JavaScript that listened for click events. It was preventing the default behavior and, as such, preventing the checkout form from launching.

git bisect is not a command you'll use very often. Nonetheless, it's one of the most helpful and impressive Git commands. Next time you have a bug in your code, don't play try to find the need in the haystack of your commit history - use git bisect.

Want to see git bisect in action? I demo git bisect and other Git commands you'll use every day in my video series Getting Git

Find this interesting? Let's continue the conversation on Twitter.